Patients were allowed to feed orally from the third day after ESTD, while treatment with proton pump inhibitors, hemostatics, and nutritional supports was initiated. The vital signs were monitored, and gas-related complications were closely detected, including subcutaneous emphysema, mediastinal emphysema, and pneumoperitoneum. All patients were asked to join in the follow-up plan, and surveillance endoscopy with iodine staining was performed at 1, 3, 6, 12, 24, and 36 mo after ESTD.

The secondary outcomes were the rates of adverse events, including intraoperative and postoperative bleeding, perforation, muscular injury, postoperative infection, esophageal stricture, positive margin, and local tumor reoccurrence. Procedure time was defined as the time from lesion marking to the termination of therapeutic endoscopy. Perforation was defined as a visible hole in the esophageal wall or the presence of subcutaneous emphysema, pneumothorax, mediastinal emphysema, or pneumoperitoneum.

Tumor reoccurrence was defined as the presence of new tumor lesions in the primary resection site and its surrounding 1 cm area over 6 mo after ESTD. The average age of the patients was The lesions were mainly located in the middle third of the esophagus Three hundred eleven lesions were successfully resected from patients. The average specimen area was Twelve patients were diagnosed with lympho-vascular invasion 3. As a result, the curative resection rate was After post-ESTD pathological evaluation, three patients were diagnosed with residual cancer in horizontal margin and 12 in vertical margin, of which five patients had vascular invasion.

Another seven patients simply showed vascular invasion. All of the 22 patients were recommended an additional surgery. Finally, 17 patients underwent surgery, while the other five refused and were closely observed. The mean hospitalization stay was After ESTD procedure, 30 patients had postoperative infection, of which 29 were pulmonary infection, and one was urinary-tract infection. All of the infections were cured by intravenous infusion of antibiotics.


Moreover, 20 6. All of these patients underwent endoscopic hemostasis, and no severe complications with regard to bleeding were observed. Six patients had esophageal perforation and were cured by conservative treatment. Forty-six patients had postoperative esophageal stricture, of which 36 Also, This study evaluated the efficacy and complications of ESTD in patients with esophageal mucosal lesions.

There are currently few studies that have reported the efficacy and complications of ESTD in large samples. Gan et a l[ 13 ] reported endoscopic submucosal multi-tunnel dissection ESMTD for seven circumferential lesions, in which all patients achieved R0 resection but suffered from esophageal stricture. Huang et al[ 10 ] compared the efficacy and complication rate between ESD and ESTD using a propensity score matching analysis and observed that ESTD can improve procedure efficacy and reduce injury to muscular layer due to a better view, more efficient vessel coagulation, and longer lasting submucosal liquid cushion.

In our previous ESD procedure, we observed that the dissected mucosa shrank and blocked the lumen, making it difficult to obtain a clear view. While ESTD can avoid this obstacle by creating a submucosal tunnel, when therapeutic endoscopy enters the submucosal tunnel, it will acquire a clear operative view to facilitate observation of the submucosal vessels and muscular layer, thereby reducing the bleeding and perforation rate.

For this reason, it is especially appropriate for large mucosal lesions[ 11 ]. However, our curative resection rate was Several reasons might contribute to this: First, the heavier the lesion and the wider its range, the poorer the representativeness of the pre-ESTD biopsy. In large or multifocal lesions, even if multiple biopsies are taken, it is difficult to represent the whole picture of the lesion.

Moreover, the esophagus wall is thin; thus, too deeply drawn or frequent biopsies will lead to bleeding, perforation, and other biopsy-related complications. Therefore, we think that the reference significance of preoperative biopsy requires further evaluation and should be combined with iodine staining, narrow band imaging with magnifying endoscopy ME-NBI , and radiological examination.

Postoperative infection, bleeding, and perforation are common in ESD procedure. In our study, the total bleeding rate and perforation rate associated with ESTD were 8. The significant bleeding that needs postoperative hemostatic treatment is relatively low 1. Thirty 9. There are no available studies that have reported on post-ESD infection, although it is relatively common especially for the elderly.

We speculate that the infection is caused by the patient hypoimmunity and the history of previous pulmonary disease or inhalation pneumonia related to anesthesia; however, further studies are needed to confirm this etiology. Esophageal stricture and positive margin are serious complications of ESTD procedure, and the incidence rates found in our study were It was reported that the circumference level and the area of the lesion are risk factors for esophageal stricture[ 23 , 24 ].


When the lesion area is large enough, the artificial esophageal ulcer causes excess absence of epithelial cells and results in fibrous repair in the submucosa[ 27 ], which is the primary cause of esophageal stricture. To prevent esophageal stricture, the administration of steroids is useful, as previously reported[ 28 , 29 ], while endoscopic balloon dilation and esophageal stent implantation can also be options[ 30 , 31 ]. Wen reported that the lesion area and invasion depth are risk factors of positive margin[ 33 ], and hypothesized that a greater lesion area and deeper invasion level corresponded to higher positive rates of the incisal margin.

When treating large and multiple lesions, the risk of positive margin is relatively high, and thus accurate preoperative labeling and intraoperative complete resection are important.

There are no standard guidelines to address positive margin after endoscopic resection; therefore, we recommended additional surgery for all patients in our study with positive basal margin, horizontal margin carcinoma involvement, and vascular invasion; however, several patients refused and entered the follow-up cohort. No residual or recurrent tumor was observed during the follow-up period.

The present study is the largest sample research of ESTD technique to date, and our observation indicators are complete, the follow-up period is long, the results are credible, and there is strong reference significance in clinical work. Moreover, our study also performed a detailed evaluation of postoperative pathology and emphasized its guiding role in the postoperative management of the patients. However, this study has several limitations.

Firstly, this was a retrospective study and thus has inherent case selection bias. Secondly, this was a single center study; therefore, the operation level of ESTD in this study cannot be fully represented in whole. In conclusion, ESTD for superficial esophageal squamous cell carcinoma and precancerous lesions is effective and safe, exhibiting high en bloc resection rate as well as low bleeding and perforation rates.

When using ESTD to resect large mucosal lesions, the incidence of postoperative esophageal stricture and positive margin is high, and thus other effective preventative measures should be considered. Endoscopic submucosal dissection ESD is becoming the standard treatment for early gastrointestinal cancers, as it has a higher en bloc resection rate and a lower recurrence rate than endoscopic mucosal resection EMR.

However, when treating large mucosal lesions, ESD always faces many difficulties, such as multiple submucosal injections times, long procedure time, and low complete resection rate. To overcome these difficulties, a modified technique named endoscopic submucosal tunnel dissection ESTD has been proposed. Tags from this library: No tags from this library for this title. Log in to add tags. Holdings 0 Title notes Comments 0 No physical items for this record. Log in to your account to post a comment.

Export Cancel. Brian P. Saunders is on the advisory board and has a royalty agreement with Creo Medical Ltd. Joseph Sebastian and Nipin Bagla have no conflicts of interest to declare. Paula Morgan, Mrs. 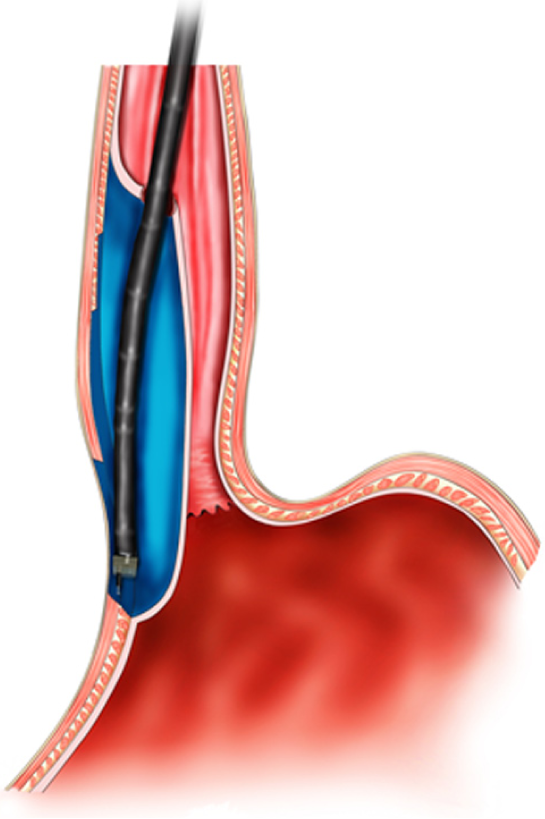