A review of how to handle the GPIO from the command line. An interview with Mike Thompson, the lead developer of Raspbian. Raspberry Jams and other community events. A review of the Raspberry Pi's development. Speeding up code development with GNU Make. Issue 8 - December Control your home with a Raspberry Pi and catch Santa in the act!

The power of Raspberry and the simplicity of Arduino using Nanpy. An interview with the designers if the PiBow case. Using basic variables and STL strings. The second installment in our Ada programming tutorial. A look back over the last twelve months of The MagPi. Issue 9 - February This month there is the opportunity to win a Gertboard. 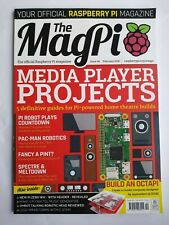 Keeping the SD card images safe and restoring backups. Learn some lashup scripts with the Bourne-again shell. Find this month's events in your area. Encouraging others to get coding with the Raspberry Pi. Generate fractal images with Scratch. Using a simple client-server model for parallel calculations. Issue 11 - April Control and monitor your home heating system with a Raspberry Pi and a Smartphone.

A constructional project for the hobbyist who is confident with a soldering iron. Yorkshire, Bermuda, Geneva, Bristol — what's happening in your area. Installing and modifying Minecraft on the Raspberry Pi with Python. An introductory guide to setting up a printer with CUPS. Learn how to configure your own simple intranet. Learn how to program the Raspberry Pi by using Assembly Language. An introduction to Charm Data Types. Control console colours using escape sequences.

Sort a heap of numbers using Scratch. Issue 12 - May Liz Upton writes about the first year of The MagPi. How to make a case for the Raspberry Pi in steps. A breakdown of the various operating systems available for the Pi. A note of thanks from the ZX generation.

Sharing his thoughts on Raspberry Pi design challenges and the future. Use encryption to code and decode messages.

Issue 13 - June It's a small world after all Playing the Archimedes version of the classic space trading game on a Raspberry Pi! Racing with Scratch — learn how to write simple video games. Using a simple client-server model for parallel calculations — part 2.

Issue 14 - July Part 1: Getting to grips with the camera module. Controllng the Maplin robotic arm with Python. Barnsley, Lima, Singapore, Liverpool. What are the ingredients for a fun filled family Pi day? Using a simple client-server model for parallel calculations — part 3. Issue 15 - August Using Nanpy to connect your Raspberry Pi to an Arduino. Raspberry Pi timekeeping with a real time clock. Part 3: Building a toolkit of patterns.

Play historic games on the Raspberry Pi. Preston, Manchester, Powys, Gateshead. Charm programming on the Raspberry Pi. An introduction to Python iterators and generators. Issue 16 - September Part 4: Multiplexing and scrolling text messages. Win a selection of expansion boards. Part 2: Java control-flow statements, numbers, strings and booleans. On and on, and now this? And this is not a hard design. How can this not be discussed at multiple hardware design review meetings?

A competent HW designer would never deliver any of this. Also, any decent engineering process, and it does not have to be costly, would avoid this. Does anyong have any insigth into how Raspberry pi designteam operates?

It backpowers connected clients if used in device mode and powered over gpio, this causes some devices not to connect to it properly. It has been serving as a little server with a attached harddrive as a test on my desk ever since I got it. The problem is that many people already have USB-C supplies e.

This problem is worse than it seams as it points to a complete lack of understanding on the issue of testing…. Anybody adding a usb c port to anything would test it with a wide range of usb c power sources, to not do that just screams of incompetence..


And to not realise usb c is complicated — and requires even more testing — is truly breathtaking.. The FIRST thing they should have tested it on is the usb c power sources people are already likely to have.. Gotta love the armchair engineers out there. You know, that little bit-slice cpu you have been designing. The schematics are open source, where are your board designs?